No matter the time of year, mention Copenhagen, or indeed any of Scandinavia, and I can't help but picture snow dusted streets, warm heavy food and chunky knitwear. Imagine then my pleasant surprise to be greeted instead with a weekend of largely blue cloudless skies and temperatures in the high 20°C's! That combined with incredible food, the friendliest people and some of the most interesting architecture I've seen, has earned Copenhagen a prominent spot on my must-visit list!

With only a 3-day weekend spare for exploring, here are my top Copenhagen picks...

(1) Climb the Spire of the Church of Our Saviour

What caught our eye about this particular Church was it's spire; jet black and wrapped in a golden, helical staircase, for 35DKK (£4) you can climb its 400 steps, the last 150 of which are external with only a small fence between you and a sheer drop. Scary? Absolutely, especially as it narrows as you climb. That said, the views of the surrounding city are undeniably breathtaking and well worth the sweating palms!

(2) Have a pint on Nyhavn's waterfront

Besides the Little Mermaid, no Copenhagen sight is perhaps as infamous as Nyhavn, the small port flanked on both sides by rows of old and brightly coloured Danish houses. Despite it's naval and trade roots, today Nyhavn is mostly home to bars and restaurants but be warned, given its tourist draw, expect high prices for only mediocre food!

Top tip - if you want to enjoy the ambiance without bankrupting yourself, grab a reasonably priced pint to go from a restaurant outdoor bar. Cold pint in hand, sit yourself down in the sun on the waterfront edge and enjoy!

Danish smørrebrøds are open sandwiches first created during the country's industrial revolution as easy to assemble packed lunches. Erected atop a thick slice of dense buttered rye bread, the toppings can vary from cheese + watercress, to pickled herring. But no matter the topping, prepare yourself for one of the most beautifully presented and tasting lunches you'll ever have!

Top tip - a special mention is deserving of Aamanns Deli & Takeaway which is famous for both its traditional and more contemporary takes on this classic dish!

The well known story by Danish writer Hans Christian Andersen inspired the commission of The Little Mermaid, who sits just off of the Langelinie promenade. Whilst some say she's unworthy of a visit, I'd argue you haven't really done Copenhagen if you haven't dropped in to say hello! The hordes of tourists you will have to fight through for a picture would most certainly agree!

A Not-so-Fun Fact - in the original tale, not only does the mermaid exchange her tongue for legs but she then constantly feels as if she is walking on sharp knives and her feet violently bleed. There is also no happy ending for our protagonist; instead the Prince marries another and with her heart broken, the mermaid turns into sea foam. I cry!

(5) Gaze in awe at Fredrik's Church (AKA The Marble Church)

Meant to be the founding spot of a new city district called Frederiksstaden back in 1749, Fredrik's Church (or the The Marble Church as it's now more commonly known) took an incredible 145 years to complete. Whilst the external rococo (ok yes, I googled that!) architecture and the looming green copper dome are impressive, be sure to wander on in (it's free) to gawp at the dome’s interior - the real eye-catcher!

Top tip - there is apparently a daily paid-for tour that takes you upstairs for closer views of the roof and sweeping views of the city!

(6) Treat yourself to a 5-course sampler menu at Høst

Described as fine Nordic food at affordable prices, Høst's 5-course sampler menu (which ended up being 7 courses) was more than worth its 450DKK (£52) price tag! From salted scallops to seared lobster, pork knuckle to sweet beer junket, it is 100% one to add to your foodie list when you’re next in Copenhagen!

Top tip - for an extra 345DKK (£40), you can get your menu wine paired and judging from those doing it around us, you do get a hefty glass with each course!

Classed as the world’s first porridge bar, Grød serves up bowls of hearty nutritious goodness that look as good (if not better) as their scrummy descriptions sound. I went for their açai smoothie bowl, complete with banana, raw peanut butter, flaked coconut, mixed seeds and blueberries. A perfect start to a fun-packed day of adventure!

(8) Marvel at the city's architectural gems 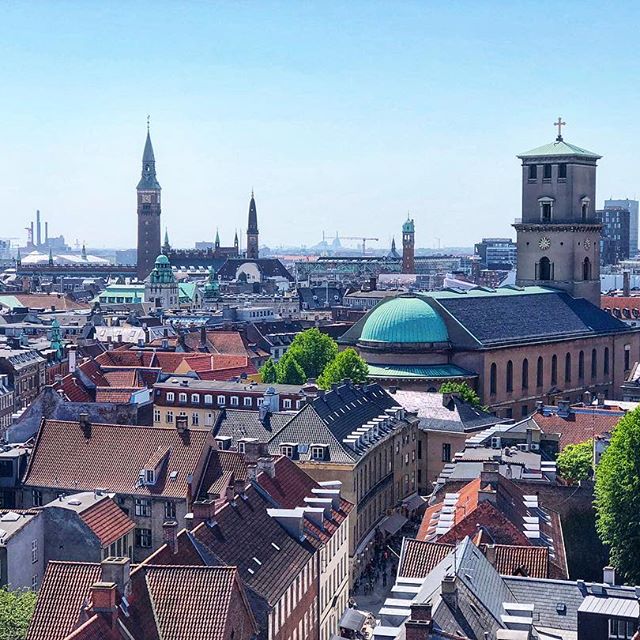 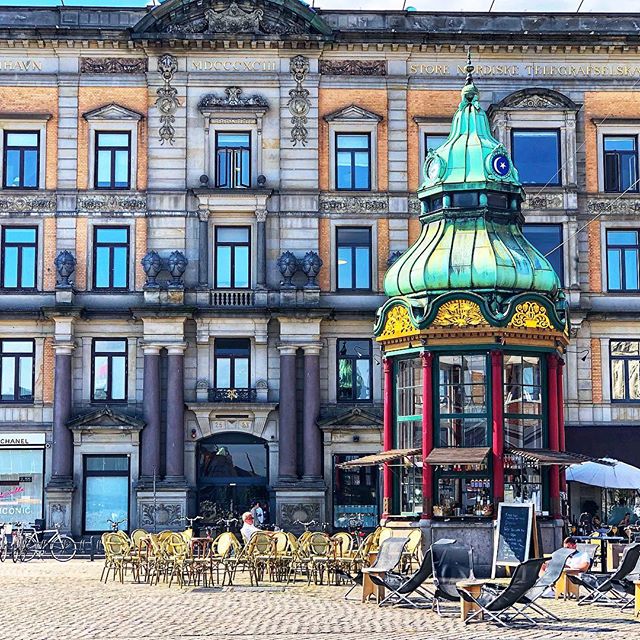 Copenhagen's architecture is super diverse and really very stunning. Whilst I am by no means an architectural expert, I read that it has some of the finest examples of medieval, renaissance, baroque, rococo and modernist architecture in all of Europe! You can spend hours just wandering around Copenhagen's streets simply lapping up its buildings, spires, churches, statues, fountains and more...there is so much to see!

Pictured are the bright yellow houses of Nyboder (featured in The Danish Girl); views of central Copenhagen from the Rundetaarn; and one of only a few remaining former romantic style telephone kiosks made with copper, wrought iron and hard wood, now used as a coffee kiosk!

A stark brick cylindrical tower, the Rundetaarn (or Round Tower) was originally built as an astronomical observatory but today is mainly visited for its observation deck that costs a mere 25DKK (£3) to reach. Aside from the expansive views it offers, the tower is also known for it's interior helical equestrian corridor that gently winds, like a corkscrew, inside the tower to the very top!

(10) Dine with the hipsters in the Meatpacking District

As the name suggests, Copenhagen's now-trendy Meatpacking District was at one time the centre of the city's meat trade. Today, the industrial buildings have been repurposed into arguably the most hipster corner of the capital, complete with some of their best bars and restaurants.

Top top - Whilst there is ample choice, the food at the Kødbyens Fiskebar (fish restaurant) was so so nice, we ate their twice! Try their fresh blue mussels steamed in apple cider and their squid w/ seared celeriac, black garlic + blueberry.

(11) Live like royalty in the Rosenborg Castle & Amalienborg Palace

The Danish royal family has played a significant role over the years in leading the country and there are no better places to learn more about this than inside the capital's numerous palaces and castles. The Rosenborg Castle (left) costs 110DKK (£13) to visit and boasts the crown jewels, whilst the Amelienborg Palace (right and 95DKK/£11 to enter) is home to a museum in which you can begin to understand the origins and history of the monarchy.

Whilst maybe not as popular as it is in London, there is still an ample number of options when it comes to street food in Copenhagen!

- Torvehallerne boasts 50+ stands between two market halls and sells everything from fresh fruit and cinnamon pastries, to wine and stacked smørrebrød!

- The Bridge Street Kitchen has replaced the very popular but now discontinued Copenhagen Street Food market on Paper Island. Expect less choice than at Torvehallerne but maybe more ambiance if it's a nice day as you can sit out with drink in hand enjoying the live music!

- Last but not least, it would be remiss of me not to mention the city-wide kiosks that dish out top notch hotdogs; warm bread topped with a roasted sausage, remoulade (like a piccalilli-mayo hybrid), crispy fried onions and pickles...these are not your average dirty streetside snack!

Copenhagen's infamous Tivoli is as much an amusement park, as it is a beautifully kept gardens. As such, whether you are an adrenaline junkie or rollercoaster-adverse, this national treasure has something for everyone!

(14) Chill out in Copenhagen Cathedral

Noticing something happening inside Copenhagen Cathedral at 11PM, we peeked in to find all the lights were off barring the old gas lamps flanking each pew and the room was filled with candles. And then the acoustic music started...seemingly just one man hidden up at the back by the organ, his music filled the giant hall and it really was beautiful. Some of his songs were hymns but most were contemporary covers. I am not religious but it was such a welcoming, emotional and mesmerising use of a church and I loved every second!

(15) Stroll around the vast Frederiksberg Gardens

Covering a whopping 64-hectares, Frederiksberg Gardens is one of the largest and most popular open green spaces in the city. We barely even scratched the surface of this vast park but between sun basking on its lawns, rowing on its canals and strolling amidst its English garden, towering trees and overgrown nature-ridden tundra, you could easily spend a whole day within its grounds!

I could go on and on about Copenhagen, but at the risk of losing you, here are just a last handful of honorable mentions worth noting:

(16) Getting your brew on at the Carlsburg Experience - we didn't actually pay for the experience itself but instead, grabbed a pint to go, boarded the free horse-drawn cart and took in the surrounding factory buildings and houses as we drank!

(17) Get high in Freetown Christiania - a self-proclaimed autonomous anarchist district of the city, head here to buy/smoke weed if that's your flavour. Do NOT take any pictures in there if you want to avoid conflict. A lesson I had to learn the hard way!

(18) Go for a dip at Islands Brygge - sadly we didn't make it here but I have it under good authority that this grassy beach in the city centre is well worth a visit for a swim to take the edge of the heat in the summer months!

And that is that; Copenhagen delivered on every level and should you ever have a weekend spare for a European city break (and perhaps a little more money set aside for it) then I wholeheartedly recommend you go!

Travel Guide - A Weekend in Glasgow